For Everyone who already misses winter (anyone out there??) or wants to give it a proper send-off! 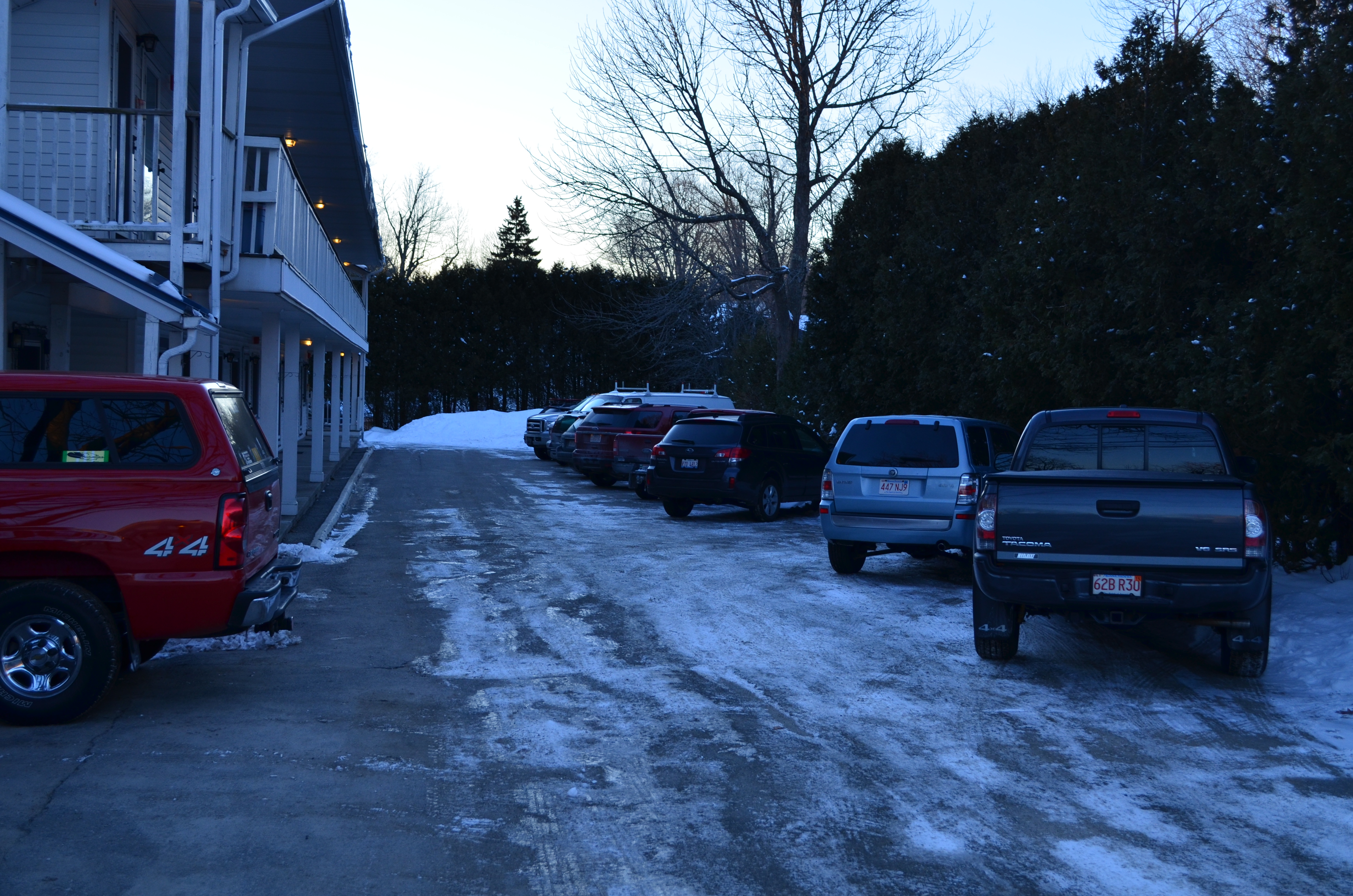 Our automotive guests at dawn 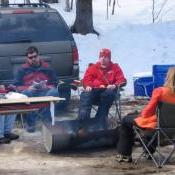 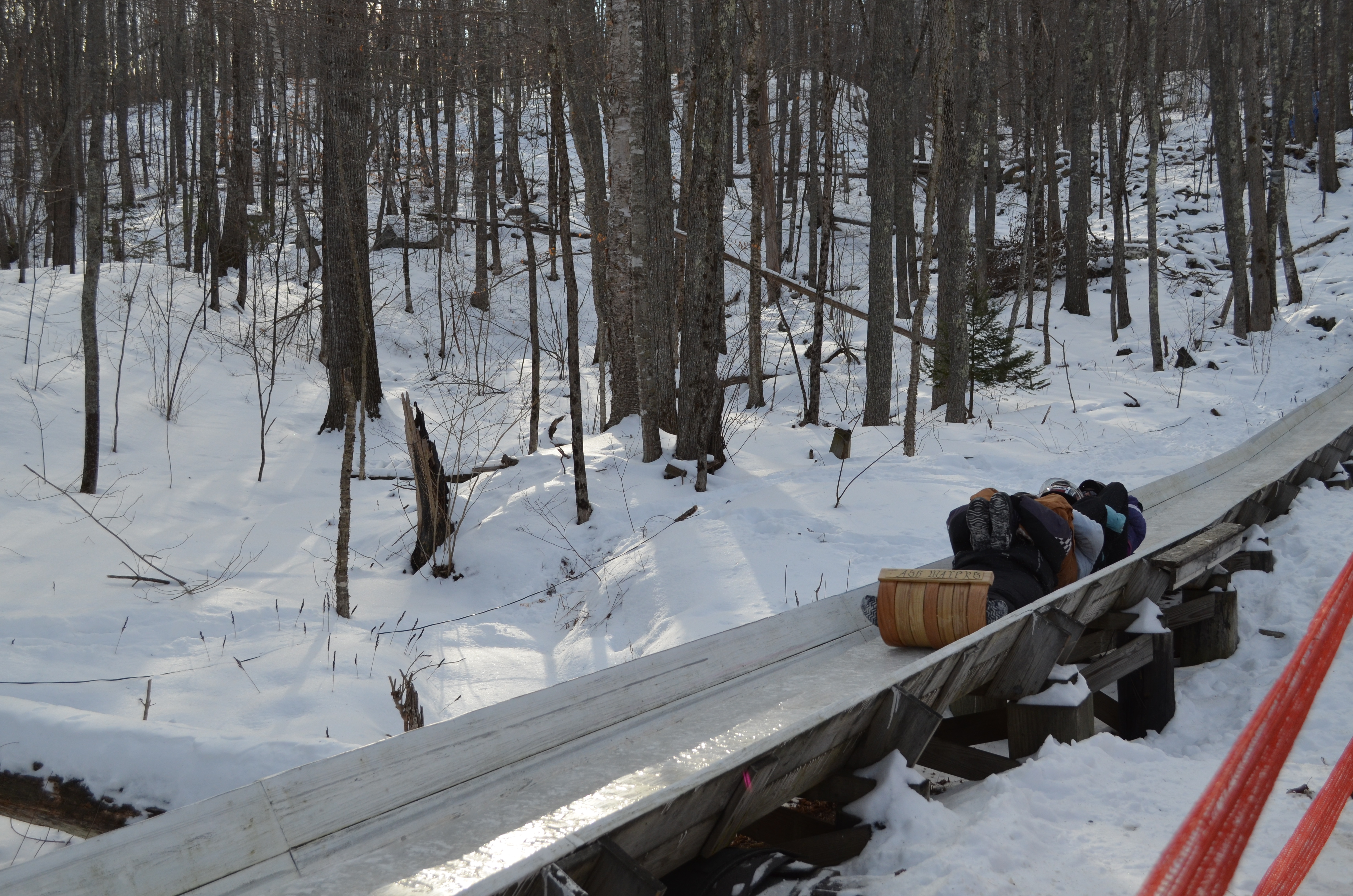 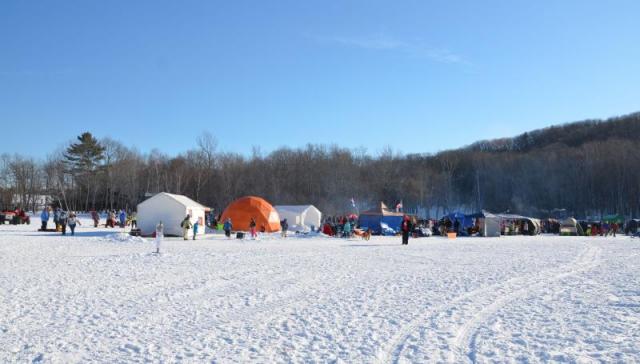 The view from Hosmer Pond 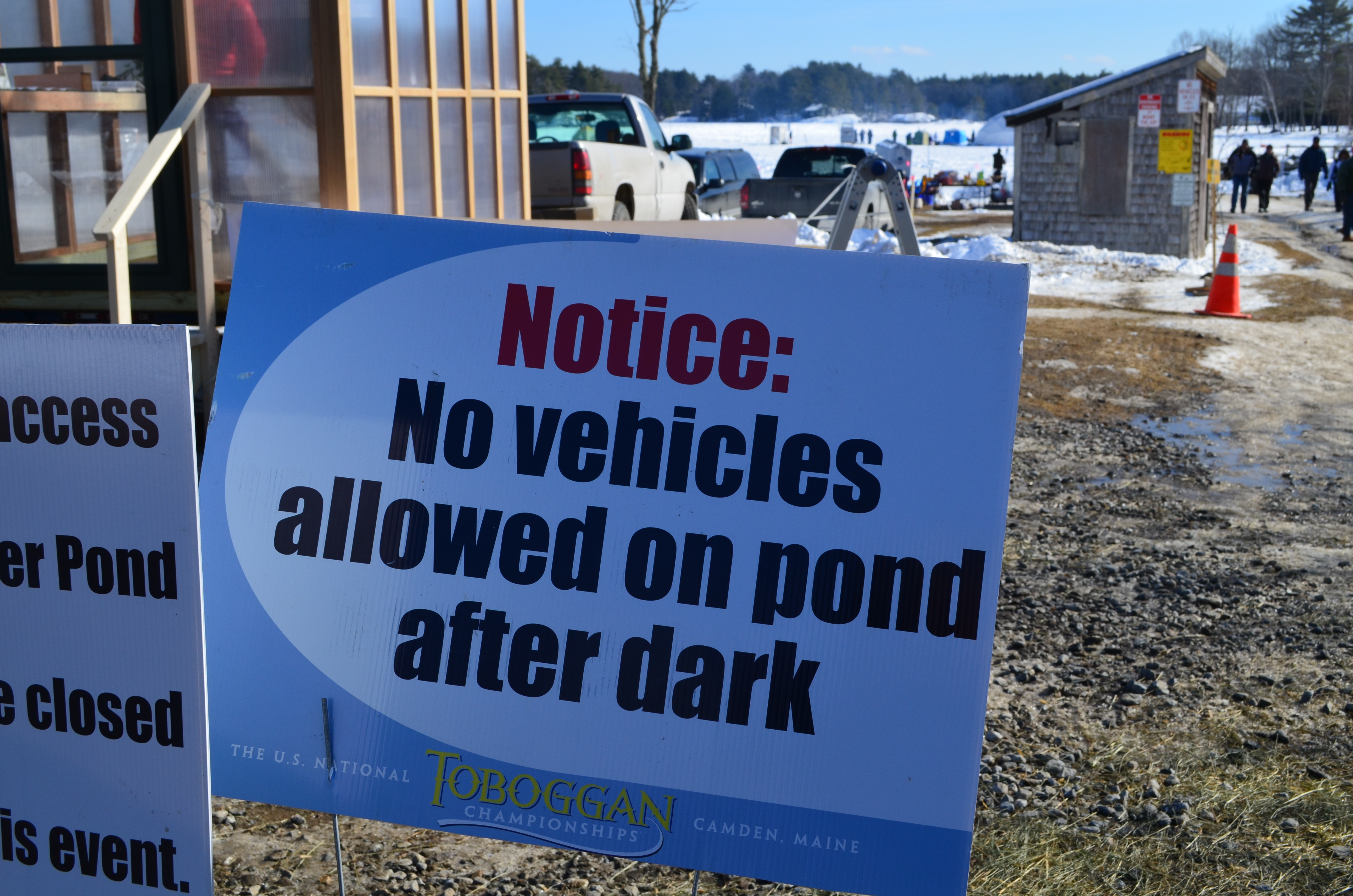 “You’re gonna have a lot of fun,” Rick and Jane, the previous owners of the Towne Motel, told us when asked about the Toboggan Championship weekend in the beginning of February, and about the guests we could expect. Many of these guys, we heard, have been coming to the championship for years if not decades, and almost as many have stayed here at Towne Motel each year. And of course, like every other venue in town, we would be fully booked, which is always a “beautiful thing,” as Rick would say. Especially after the quiet weeks of January.

We hadn’t had a lot of snow during the previous weeks, but just on cue, a big storm hit Wednesday before the big weekend, and we spent most of that day engaged in snow removal activities. (i.e. a few hours of back-straining sweeping and shoveling and moving snow around). We wondered whether our Thursday check-ins would make it up here  – after all, the entire East Coast had once again been snowed and iced over. Some called to say they might get here later than planned, but no one canceled – massive outages back home be damned (or escaped). These guys and gals just HAD to be here for Toboggan weekend, and they were.

Clearly, we needn’t have worried about them. These guys drive serious cars – all trucks and jeeps and Explorers; none of that winter sensitive stuff without four wheel or all wheel drive. The problem wasn’t for them to make it here; it was more about getting all these vehicles parked in a lot without clearly visible lines between parking spots, while snow mountains were taking up space around the perimeter. It worked out – just about – probably because the University of Connecticut Toboggan team said they weren’t planning to drive an inch until check-out. So they, together with us, parked in the back, in random, haphazard, diagonal fashion (not quite like parking and driving in Rome – if only because our cars were bigger – but close). The parking lot felt very important and muscular that weekend – all that vehicular testosterone. Not that there weren’t female guests; they just didn’t drive feminine cars -if there is such a thing. After all, toboggans had to be transported, along with cleaning and winter supplies, and whatever else is needed for a partying championship weekend in freezing temperatures.

Because that’s what the Toboggan weekend is like here in Camden, not surprisingly: COLD, but with a cold-be- damned- let’s-party-outside-for-three-days-anyway attitude. We watched a video of it on YouTube last year – it felt as crazy as it felt cold. We couldn’t wait to see it in person this year.

Before we could, though, we met our tobogganers. Two couples from Pennsylvania, the PA state champions and their toboggan virgin friends, were among the first to check in on Thursday, and the last to leave on Monday. The PA state champions were the winners of the previous year’s best crafted toboggan. The first morning, they showed us their two beauties – all splayed out across the bed in their first floor room (good thing they had placed their own blankets underneath, wisely preventing any house- or innkeeper heart attacks): shiny, polished wooden specimens, with colorful cushion upholstery for comfort. They looked good enough to win again, but what did we know about toboggan design??

For whatever reason, they didn’t win this year. But they did get far into the championships, so that when we finally made it to the Snow Bowl for the final races, we ran into them at the top of the hill (the athletic part of tobogganing being less the descent “down the chute” than the climb up to the top of the chute, toboggan in tow). Had we tried to go Saturday (when we were much too busy with housekeeping and baking and guests), we would’ve taken the $2 shuttle from the Camden Village Green –  there wouldn’t have been enough parking. Even on Sunday, every driveway within a mile of the championship posted a huge No Parking sign (in Jersey, they would’ve rented out even the tiniest driveway for a hefty parking fee). But actually, by Sunday afternoon, many of the eliminated teams and their supporters had left, so there was plenty of (muddy) parking. But there was also still a lot going on, especially in Tobogganville, a little makeshift snow village of food stands, hot cider vendors, a bonfire for warm-up, a cell phone charging station, musicians, sponsor tents, and truck beds selling toboggans and related items. The final races for the 2 person teams had just begun, so we watched, listened, took pictures, and climbed up to the launch area to see the beginnings of launches and not just the fast zoom through the chute. We concluded that the quick drop to the chute, followed by a rattling ride would probably not be good for our backs. But we haven’t ruled out forming a team with our housekeepers for next year. We’d just have to make sure to be eliminated by Friday check-in time. J

The Toboggan weekend is full of offbeat people and events. While the 2014 Olympics in Sochi were having their opening ceremony, Tobogganville had its happy hours: the Down the Chute beer and wine challenge from 3 to 7, nicely wrapped around the optional 2 and 3 person division first runs, which were from 4 – 6:30. Nothing like a nice cold beer when you really need it – and who doesn’t, on a 20 degree  late afternoon??

As anyone knows who’s ever been to or read about the Toboggan weekend, the team names seem to be what it’s all about. More than 400 teams competed this year, most of them not too seriously, at least if their names and costumes are any indication. There were, for example, the liquor teams: Free Beer, the Flying Beer Boys, the Rum Runners, Whiskey on Ice, or “3 Jackasses and a Dumbo Walk into a Bar.” Lots of bathroom jokesters, too: Gas-X, Skidmarks, Chute or Get Off the Pot, Scared Chuteless, or the Red Ashed Baboons. And word gamers:  Ice Scream, Toboggageddon, the Throbbin Bobbins 1, 2, 3, and 4; Two Soggy Boggin Boys, Sled Zeppelin, The Greatful Sled, Just Chute Me Now. Well, you get the idea: the Tobogganers don’t take themselves too seriously, and they come with a devil may care attitude towards winter: if you can’t beat it – and you sure couldn’t this year- join it. (And yes, they are about testosterone. But there were a few all female teams too: the Valley Kingdom Babes, Grandma and the Girls, Desperate Housewives, and Hot Women on Wood, to mention about half of them)

Entertaining as it was to watch the different styles of barreling down the chute, it was also cold, so we needed to get moving. And what better place to take a walk than a frozen lake? Hosmer Pond, where the tobogganers end up at the bottom of their runs, was frozen solid, and if we had had any doubts, the many trucks and SUVs on the lake reassured us. There were snowmobiles, winter bikes, skis, and pretty much any wintery type of transportation you can imagine. And yet it was still a pedestrian’s paradise: no crosswalks necessary to cross the whole lake, and even in the midst of a busy winter carnival, we got that peaceful Maine feeling walking all along the pond’s perimeter, smelling the pines and the sunny fresh winter air, imagining what the summer houses would look like a few months later, with their boat docks and swimming decks.

Quebec and the Europeans have carnival to make it through the last weeks of winter; Maine has a  carnivalesque equivalent just a few miles from Camden. Check it out if you never have; you might just get hooked! But reserve early – more than half the town’s rooms are booked out before Christmas.

We’ll leave you with a few tips for first time competitors from the Toboggan Nationals Website (http://winter.camdensnowbowl.com/24th-annual-us-national-toboggan-championships)

And here is a piece on some of the fun costumes this year:   http://www.penbaypilot.com/article/clever-naughty-who-wore-it-best/28389

This entry was posted on Saturday, April 5th, 2014 at 3:46 am and is filed under In and Around Camden. You can follow any responses to this entry through the RSS 2.0 feed. Both comments and pings are currently closed.