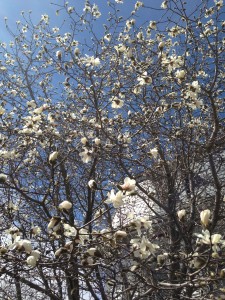 It’s a white tree, but it isn’t snow!

Spring in Maine isn’t known for much to write home about – mostly because there aren’t enough visitors to write home to anyone! Everyone is more interested in the end of the season– fall foliage – than in the beginning of life here in spring. We can’t blame them – fall is a lot more colorful, and there aren’t any dirty remnants of snow to ruin the scenery.  Spring travelers in general don’t seem to want spring; they want summer. Ever heard of a popular spring break destination that doesn’t involve beaches and pools? Except for skiers, spring travelers have had it with winter, and spring just isn’t different enough, except in places that didn’t have winter. And everyone knows Maine had winter. Many even think that Maine still has winter in spring – or at least mud season. Well, we’re not gonna lie: it’s got some of both. But it also has a lot more spring than we expected! Even if it’s the kind of spring writers and poets often describe as moody and fickle, like Charles Dickens does in Great Expectations: “it was one of those March days when the sun shines hot and the wind blows cold: when it is summer in the light, and winter in the shade.” We’ve had some of the same warm sun/cold wind combos as Dickens’ 19th century England – so maybe Maine isn’t all that different. Only a bit slower (“hot” wouldn’t quite be the word for the sun we had in March).

Mainers can be pretty cynical about spring, and not just in order to scare newcomers like us. If you google “signs of spring in Maine,” you’ll probably come across lists like this one from seacoastonline.com:

“Ah, spring. The green, green grass, the colorful flowers, the graying slush …Well, one out of three ain’t bad. So far this year, spring hasn’t exactly sprung just yet. But while I’m not a native Mainer, in my decade living here I’ve figured out the subtle signs of spring arriving in Maine. They include:

We start to throw open our windows to “air out the house” on warm days (any days over 40 degrees).

We switch from snow boots to rain boots.

We bundle up warmly — to head to Dairy Queen for a treat.

We start looking at the gardening catalogs, fully believing that somewhere under all that snow is a lawn waiting to come back to life, and flower beds ready for planting.

We leave off the hats and mittens — though not the parkas just yet — when we go outdoors.

The snow has finally melted enough to excavate the Christmas decorations.

The potholes look like something created when a meteor struck earth.

It’s still sunny after dinner (if we eat early).

The dogs are (sorta) willing to go outside voluntarily again.

When someone says “salt” we actually think of the food version first for a change.

And Erin Donovan describes Maine springs in the Bangor Daily News: “Winter is slow to release its grasp, removing only one icy finger at a time from our brittle necks. Just when you think it might be time to retire your lumpy and layered garb, winter will grab you by the collar and cackle, ‘You need to go to the gym for a few more weeks before those come off.’” (March 23)

True – the natural harbingers of spring can be a bit slow here. We have yet to see a tulip, other than in the form of potted plants, and daffodils are still in full bloom at the end of April. Until just recently, crocuses were still in charge – now they have some competition from small blue flowers whose name we don’t know. But considering that it was the coldest winter on the Maine coast since 1940, spring is doing a pretty decent job. On the 11th of April we were wearing shorts and working outside around the inn all day. (It was pretty amazing how effectively we both kept finding outdoor chores and postponing indoor ones). Wintering birds like ospreys have returned to the area (we wouldn’t have noticed, but we go by our housekeeper’s eyes and ears); and the snow, for the most part, is gone (save a stubborn dirty pile at the back of the parking lot, which is looking increasingly anorexic every day). And anyone who’s tried to ice skate on a lake in the past month better know how to swim.

And then there are the human signs of spring – where spring fever is even more noticeable.

While a handful of shops downtown still have limited “winter” hours, most reopened weeks ago, when boxes of new merchandise anxiously waited to be unpacked in stores like The Smiling Cow and The Village Shop. Restaurants have been re-opening or come back from their short March vacations – Long Grain re-opened April 10, Saltwater Farm is serving dinner again, on weekends; Atlantica is back with new menus, and Fresh has new (and wonderful!) owners and an exciting new menu. Boynton McKay, one of Camden’s all time favorites for breakfast and lunch has changed hands as well, hands that make all the popular classics as well as ever. (Lots of our regulars love this place – and have even been known to ditch our continental breakfast for some serious eggs or pancakes there.) Cellardoor Winery is now open Thursdays through Sundays in both locations – Rockport and Lincolnville, and starting Mother’s Day, will be open daily. Peter Ott’s Steakhouse just opened its new doors on the ground floor of the Grand Harbor inn right in time for Easter weekend, and has a cool new website and name (Peter Ott’s On the Water) to match. The Owl and Turtle bookshop has had new owners since the end of February, and now has a cool new café as well.  Just a few months ago, Selena and Ricky stayed at Towne Motel during their house inspection – and already they’ve bought and remodeled a popular Camden hangout place! Go Owl and Turtle! 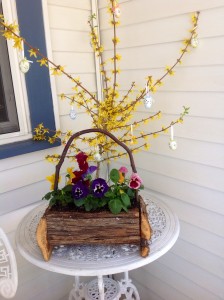 One of our housekeepers has been bringing us large bundles of forsythia, which bloom in almost no time. One bunch was recently transformed into an outdoor Easter bouquet with decorative eggs. It shares the table outside the office with our first pansies, which have taken over the basket that still housed a wintery pine arrangement three weeks ago. And, in anticipation of summer afternoons eagerly awaiting guests, we finally put up the new hammock seat we got at Once a Tree during Christmas by the Sea! Somehow we see ourselves doing curb-side check-ins this summer. And of course, it’s also for guests – we’ll try not to hog it.;)

Speaking of whom: our recent guests have been a fun and diverse bunch; from spontaneous spring walk-ins to boat people gearing up for the season, from builders and contractors working on local projects to island people coming for errands and getting stuck because of weather or ferry schedules, or just because they want to. We even had some guys coming to buy elver eels during the elver eel harvest this week. We’d never even heard of elver eels, much less of how lucrative a business they are here every spring. Innkeeping can be very educational indeed.

At least half of Camden seems to be working on projects to get ready for summer. We still have a few makeovers going on ourselves, big and small – stay tuned for details in our next newsletter and blog post! And do come visit in spring sometime – just because mother (or teenage?) nature is a bit confused and hormonal in spring, doesn’t mean she has nothing to offer. Maybe she’s just trying to offer something for everyone, winter and summer fans alike. When else can you have your first ocean-going guest (a recent Australian visitor of ours) the same week as another quarter inch of sleet and snow?

There is a German saying Katja grew up with, “April April, der macht was er will” – April, April, it does what it wills.  Maybe if we let nature do what it wants in the spring, it’ll let us do what we want in the summer.:)

This entry was posted on Monday, April 28th, 2014 at 9:52 pm and is filed under In and Around Camden. You can follow any responses to this entry through the RSS 2.0 feed. Both comments and pings are currently closed.