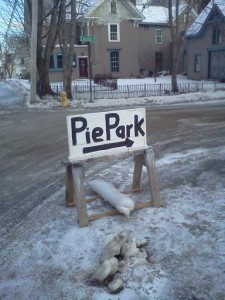 On a very cold Sunday a few weeks back, we experienced a uniquely-Midcoast Maine form of winter fun: the 10th Annual Pies on Parade, in nearby Rockland.  We’d seen ads for Pies and spoken to a couple of past participants, but we didn’t quite “get” the concept of this giant pie sampling at various businesses in Rockland.  Now we know that the only way to get Pies is to do it: to gorge yourself on pies and tromp around in the cold and get into the spirit of antic fun and pie camaraderie.

As is our usual M.O, we didn’t decide to go until long after tickets had sold out (they go on sale the day after Thanksgiving–when you’d think the idea of yet more pie would have zero appeal.  Not so).  But through an insider contact, whose identity will remain secret, we scored two last minute tickets.

Did we mention it was cold?  Like, really cold; and the sidewalks were icy.  At 1:00–the start time for Pies–those sidewalks were pretty empty (except for the ice).  Well, we said, it’s just too cold; of course people aren’t going to come out for this!   Wrong again.  The crowds built and built, and by three, every pie-donating business was packed and we had to struggle through a sea of down coats to reach the next offering.

We began our journey at Captain Lindsey House, a historic B&B owned by the Towne Motel’s former neighbors, Ken and Ellen Barnes, former captains of the Steven Tabor windjammer.  Ken shared some fun stories about Towne Motel (more on that in another post) and it was great to meet them and see their beautiful property. Siobhan drooled over the book-lined study overlooking the back garden.

And from there, it was a three hour pie odyssey to, we think, almost ALL of the 25+ Rockland businesses that had donated samples of pies in support of the Area Interfaith Outreach Pantry. We read later that 60,000-odd pieces of pie had been consumed.  Totally believe it.  It was a true pie frenzy and at some point, we forgot the cold (or were too pie-insulated to feel it) and got caught up in the zany spirit of the event.  It fel like a cross between a scavenger hunt and an adult trick-or-treat.    At the Breakwater Winery tasting room, where we sampled some wine and had cheese and grapes in addition to pie, a fellow participant captured the beauty of the nibble-and-run (to the next nibble) afternoon: “I could eat like this alllll day!” she exclaimed  And so we all did.  Some highlights for us: cottage pie at Rock City Cafe, key lime and coconut tarts at the Winding Way B&B (loved their cottage-style rooms), something amazing with sausage and blue cheese at Rustico, puffin-shaped cream puffs at Project Puffin, and the best pecan pie we’ve ever had, at Berry Manor Inn.

Berry Manor was our final stop, and a  perfect end to the afternoon. The common rooms were warmed by fireplaces and filled with tables of people happily indulging in one last slice of pie and a cup of coffee.  We really enjoyed meeting innkeeper Cheryl Michaelson and hearing her stories of the Berry Manor’s famous Pie Moms.

The Rockland inns were booked solid for the weekend.  And even though Pies is a Rockland event, we’re hoping to lure some pie-eating guests to Towne Motel next year.  Rockland provides a shuttle for the event so maybe we will too: to quote the innkeepers who organize Pies, no one should be driving under the influence of pies! Many, many pies.

This entry was posted on Monday, February 24th, 2014 at 4:11 pm and is filed under Food, In and Around Camden. You can follow any responses to this entry through the RSS 2.0 feed. Both comments and pings are currently closed.