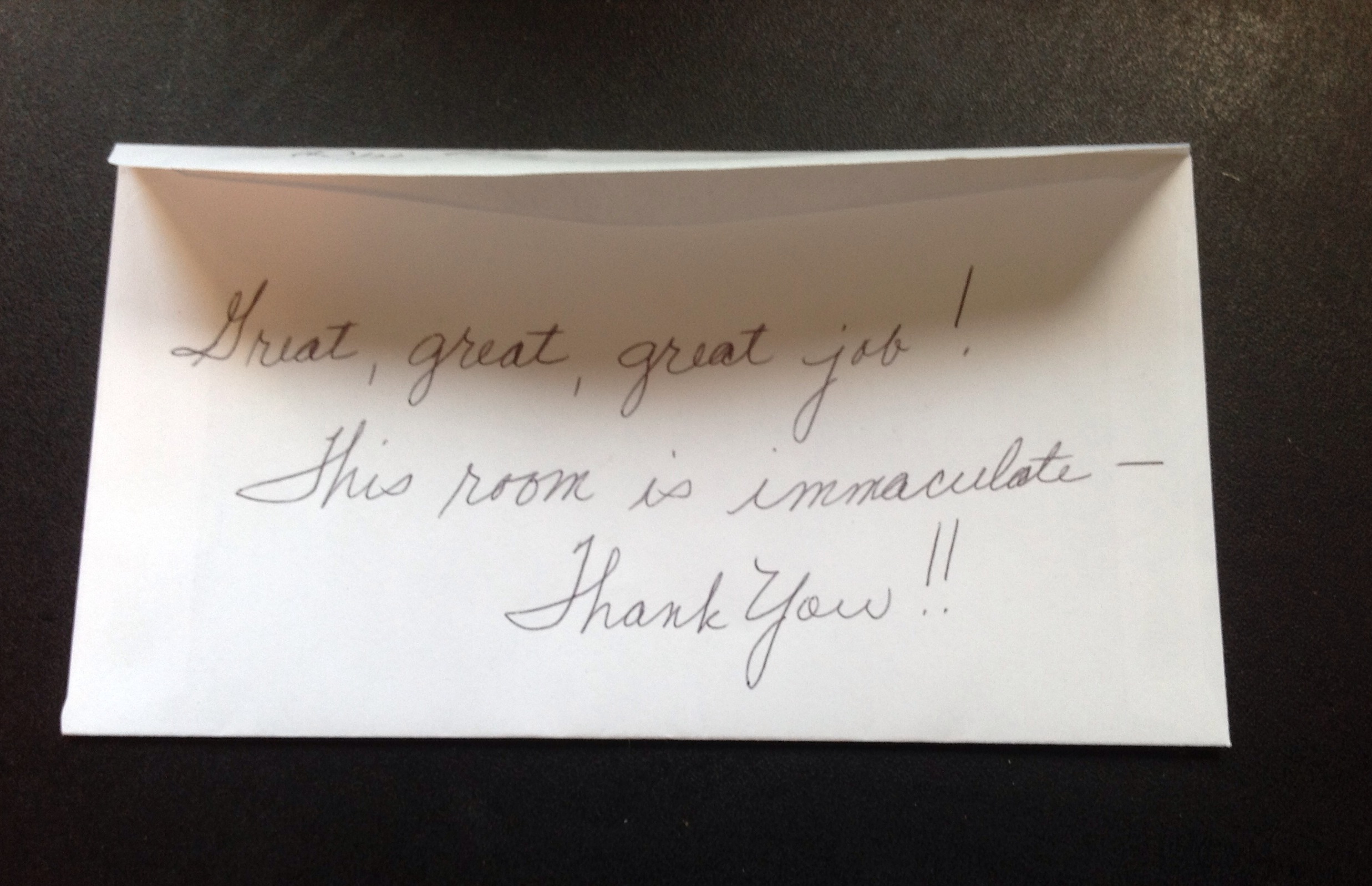 A guest’s note for our housekeepers

The Towne Motel may not offer the most luxurious digs in town, but we are convinced it has the best group of housekeepers any inn could wish for.

Not only were these guys patient, generous and courageous enough not to run for the hills (or up Mt. Battie) when their two new employers rolled in from New Jersey, they also continued to do their jobs just as well, reliably, professionally, and honestly as they did for the wonderful previous owners. And on top of that, they turned into mentors and teachers, without whom we would’ve never been able to get through the first crazy weeks. Or any other week, for that matter! These guys are fun, collaborative, super clean, detail-oriented (or, as Gale says, obsessive), and – most of all – they are proud of their work and seem to care as much about this place as we do! They knew the building long before we did, all its nooks and crannies, all the little differences between one room and the next.  They almost never need to be told what to do; if anything, they used to tell us what to do (and sometimes still have to). So -it’s about time to pay tribute to the TM Housekeeping team, the gals and guy who are responsible for more than half of our positive Tripadvisor comments. – Thank you so much, you guys, you’re the best!!

We started here in the end of September, so we had the pleasure of getting to know and work with all five of our steady housekeepers for a good month. Now that it’s the middle of winter, we miss not only our full house of guests, but also our full team of housekeepers. We’re glad it’s February, and we’ll soon have both again for at least two weekends – the annual Toboggan Championship weekend (Feb. 7-9) and the Camden Conference two weeks later. It’ll be like having summer in winter– the pleasure of a busy breakfast room, the bustle of housekeepers coming in and out of the office and kitchen, delivering towels for the downstairs washer, giving progress updates, or swiffering the kitchen floor, and their funny negotiations over splitting up tip money at the end of the day (they’re always willing to get less than their fair share).

One of our magical helpers is Gale, who is low key, fun and never has a complaint. Her hilarious dry humor sneaks up on you when you least expect it, like in shop talk about towels. We’ll never forget her lesson about folding our bedspreads without making them into a wrinkle fest. Unlike most of the others, who are either on healthy diets or tired of seeing sweet breakfast leftovers, Gale indulges us and often has a muffin or a piece of coffeecake. But most of all, she just makes us happy we have her, and cracks us up.

There is also Aini, who is the sweetest and sunniest blonde girl you can imagine – plus smart. Her lesson in how to pronounce her name stuck with us: just think of “eye,” then “knee,” and you got it. She is young, has kids, a lobsterman partner and the lobster expertise to go with it, at least one other job, and a lot of family responsibility. But she never complains about any of it, not even indirectly. She just doesn’t seem to mind hard work, and she is fine with extra hours. She can do phones and check-ins, too, which comes in handy on a super busy day. And she’s great with the cats! Tibby let her pet him the second week she was here.

Another smiling face is Andrew, our lone male housekeeper and semi-handyman. He reminds us of some of our ex- students – the sweet, good-natured, uncomplicated ones who’re always willing to work and learn something new. (Come to think of it, Katja doesn’t remember many such students– but Siobhan does).The girls tease him about his folding skills (only marginally better than ours, or so he says), but he makes up for it by getting along with everyone and being a bit of a Jack-of-all-Trades: he does the leaf blowing, the mowing, the heavier lifting, and he loves to work with and learn from our “real” handyman Craig. It was fun to see them wrap up air conditioners for the winter together. Andrew can even help shovel snow and clean all the outside walls. One day he agreed to stay late to help us move a piece of furniture we thought would easily fit up the staircase. We were wrong – but he never seemed to think the obvious: that we could’ve done some better planning and measuring. Andrew used to get here by bike, from Rockland, but now he tools around in a red sports car!

Kendra is Ms. Super-efficient and eagle-eyed. She spots the tiniest stains and smallest strands of hair; she trains new staff, and she works fast and independently. Kendra figures things out even before we tell her, and she always puts other people, whether at work or at home, ahead of herself. In October, she did a fun daily countdown to her birthday on the laundry room blackboard. She is willing to drive far even in the winter to do just 2 or 3 rooms. She thinks of things that need to be done in addition to the usual routine. And she double-checks all the rooms at the end of the day, just to catch any potential missed detail such as a wrinkle on a bed scarf. We know she will eventually go back to college or work a full-time job in a different field, but in the meantime, we’ll count ourselves very very lucky to have her. And so does the rest of the team!

And then there is Leah, a tough, independent Mainer whose hard work and seriousness are complemented by a wicked sense of humor. She’s worked at Towne Motel for many years, and unlike most of the others (except perhaps Gale), she doesn’t hesitate to tell us how to do something or to point out what needs work. Leah gave us a bit of a hard time in the beginning, and it wasn’t easy to get on her good side. We think we’ve (almost?) arrived there now, but one never knows – we better keep on our toes!

There are some scary things about Leah: Her “Ok, you’ll have to come see this” face, and her “I need to tell you something” voice. Oh no, we used to think (now we just say it)- what do we have to brace ourselves for now? Sometimes it’s something one of us did wrong (in which case we tend to blame each other or play innocent – although it’s better just to fess up), like folding or storing the “zippies” (inside pillowcases) incorrectly, or not having flipped the No Vacancy sign yet. Other times it’s something more expensive, like a hole in the wall in room 8, or the announcement that it’s time to order some new bedspreads or sheets. Or it’s something about the weather – sub zero forecasts, ice on the staircase, impending storms… She probably just wants to scare us, like the Mainers we talked about in an earlier blog post (From Away in Maine, December 12 )

Leah is, for all intents and purposes, our head housekeeper. She can come almost every day all year round, and although her eyes are a few decades older than Kendra’s, they’re just as sharp when it comes to perfection. Leah has shown us that housekeeping is both an art and a science. We don’t know what her science background is, but we do know her art history: her father was a well-known artist, and there are other artistic and creative threads in her family. Leah is an artist herself: she sews dresses from myriad different materials, often matching them with pieces of jewelry. She works with fabrics the way others work with stone, metal, clay, fictional characters: listening to them to find out what they need and what they want to be. Some of the inn’s bathroom curtains are made by Leah, and we’ve been asked never to throw out any fabrics; if she can’t use them, she (or we) can take them to Goodwill. (There’s a nice big one in Rockland). When we gave her some dark curtains we didn’t need, they quickly became parts of a stylish dress. She’s also a hat woman! Wish we had taken her picture the day she cleaned rooms in a hat she could’ve worn on 5th Avenue.

Plants and cooking are some of her other arts: she’s brought us wintery homemade soups, paper whites, and an incredibly fragrant plant that’s thriving in the kitchen now. We keep forgetting what it’s called (actually, it’s Rose Geranium – she just reminded us), but we’ve been able to keep it alive and healthy. We’d be in trouble if we hadn’t!

One thing for sure: whatever we know about housekeeping here (and it isn’t enough yet), we know from Leah most of all. If we continue to practice, maybe we will actually be able to make a bed as well as she and this team can! (But we’re not holding our breath on that one – and neither, we suppose, are they) But here’s what we learned too: to begin to see various things and decisions from a housekeeping perspective, like any smaller or larger changes we want to make to the rooms and amenities. It can be quite a different perspective compared to the guests’ or our own! And finally, what we’ve known from Day 1 but didn’t begin to truly feel until later:  these guys are not “just” housekeepers, they’re fellow innkeepers, and we wouldn’t be able to be innkeepers without them!

This entry was posted on Wednesday, February 5th, 2014 at 8:25 pm and is filed under Housekeeping!. You can follow any responses to this entry through the RSS 2.0 feed. Both comments and pings are currently closed.

2 Responses to “Innkeepers’ Housekeepers: A Tribute to the Towne Motel Team!” Comments are currently closed.