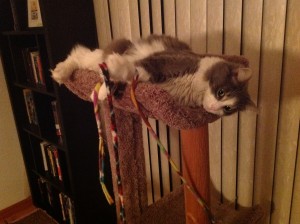 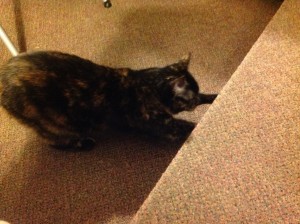 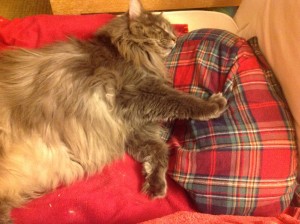 As regular readers of this blog might remember, we have three cats, two males and one female, all of them 3-4 years old, none of them entirely sure about our new lives as Camden, Maine innkeepers. When we move from one chore to the other right in front of them, they tell us in no uncertain terms that we either need to stop hustling and bustling, or (if there is really no way to take a break) we need to make cat time a regular item on our list of chores. Maybe instead of complaining, we’ve found ourselves saying, they should take over one day and see how it is. How would it be, if they took turns filling in for us as innkeepers for a few weeks? They’ve let us in on some of their ideas.

Oscar can’t tolerate human commotion, and would prefer never to have guests or housekeepers enter the common areas of our property (actually, he would eliminate common areas). Oscar’s plan, if we understood him correctly, is something like the following:

Cancel breakfast in the breakfast room, and deliver scraps of some sort, or some canned breakfast foods, to the rooms instead. Guests have their Keurigs, they don’t need a spread of choices. Why should they eat better than the cat innkeeper? Guests also need to stick to their own room territories instead of invading cat innkeeper territories. Their eyes, if possible, should stay out of these territories too, meaning the garden view windows of rooms 11-14 will be boarded up. The fence of outdoor cat innkeeper territory will disappear, enabling more productive feline exploration. With more such exploration, cat innkeeper mood will improve, and generous breakfasts can be delivered right to guests’ doors: pigeons and seagulls and chickadees, a nicely chewed mouse, or even an insect on days that call for an appetizer. On Sundays, shredded squirrel could top the Specials Menu. Breakfast will be early, as will checkout time, to accommodate cat innkeeper exhaustion after all night breakfast procuring and delivery.

If inn really needs a housekeeper, keep only K, who always keeps a respectful distance. K. has recently lived with kittens, so she knows how to work for a feline boss.

“Inn style” rooms 16 and 17 (which are part of our 1850 house, but with their own entrance) will be closed permanently and become part of cat innkeeper territory. Garage and Room 18 above it will be dismantled and imploded (noiselessly, if possible) to increase cat innkeeper’s outdoor territory.

Once all current guests and guests with reservations have left, put up the No Vacancy sign, and leave it up for good. Get sign fixed, so that no accidental moves from No Vacancy to Vacancy occur. Change voice message tone to Oscar’s signature trill, and the message itself to No Vacancy. Ever.

Harri’s innkeeping would be hands off, live and let live. Within reasonable limits, guests are fine, but they need to remain at a distance. She will be around, but never intrude into breakfast consumption or conversation. Breakfast time would be shortened and postponed till late morning, to accommodate morning bird hunts and cat TV programming; ditto with check-ins, which would otherwise cut into afternoon nap time. Each welcome guest would be greeted with stair scratches in the office. (See photo and blogpost “Cats and Innkeeping,” Dec. 16). Housekeepers G. and L. (who are familiar and friendly, giving treats and belly scratches) would be prioritized, and all kitchen vacuuming would cease for good. G. would have to wash hands in catnip before giving out treats to cat innkeeper; L. would not be allowed to trim nails so belly and chest scratches remain pleasurable. Rooms 16 and 17 will be closed permanently and become part of cat innkeeper territory. Staircase up to these rooms will be carpeted and receive daily scratch treatments.

With Tibby in charge, Towne Motel would change its focus – from a place that takes care of its guests to a place where guests can come for cat therapy, de-stressing in the process of taking care of cat innkeeper. Assistant cat innkeepers Oscar and Harri would be fired, and replaced by all-human assistant innkeepers. Guests can come in for breakfast, but offerings should either be consumed quickly or fed to cat innkeeper. Once finished, chosen guests will be allowed to hang around, including in living room, to pet, brush, play and lie down with Tibby.

No cat allergies or dog people will be allowed among guests. Guest intercoms will be installed in rooms so cat innkeeper demands can be heard widely and catered to. All housekeepers can stay, but will have to be retrained to focus more fully on Captain T’s needs and desires. Housekeeper A. will likely remain favorite and will be given more hours. Housekeeper L. will not be allowed to declare cat innkeeper spoiled.

Rates will be raised to reflect value of services received, given inncat Tibby’s prestigious Maine Coon heritage. As a result of cat innkeeper heritage, Towne Motel will be featured prominently in Buy Local publications, and therapy sessions might be extended to locals in the off season, on an hourly basis. Guests can ask to be upgraded to a therapy room with overnight Tibby stays, for a nominal fee (fee might be waived at cat innkeeper’s discretion if all nighter is satisfactory). Occasional specials will include Liedowns with Tibby, 30 minutes for $30, purrs extra, tips (in the form of cat treats, cashews,
or feta cheese) expected.

And finally, of course, rooms 16 and 17 will either be closed permanently and become part of cat innkeeper territory, or will be open to Captain Cat’s visits on a 24 hour basis, as needed. If the latter, doors to these rooms will have to remain open at all times.

This entry was posted on Tuesday, January 28th, 2014 at 2:00 am and is filed under cats and innkeeping. You can follow any responses to this entry through the RSS 2.0 feed. Both comments and pings are currently closed.