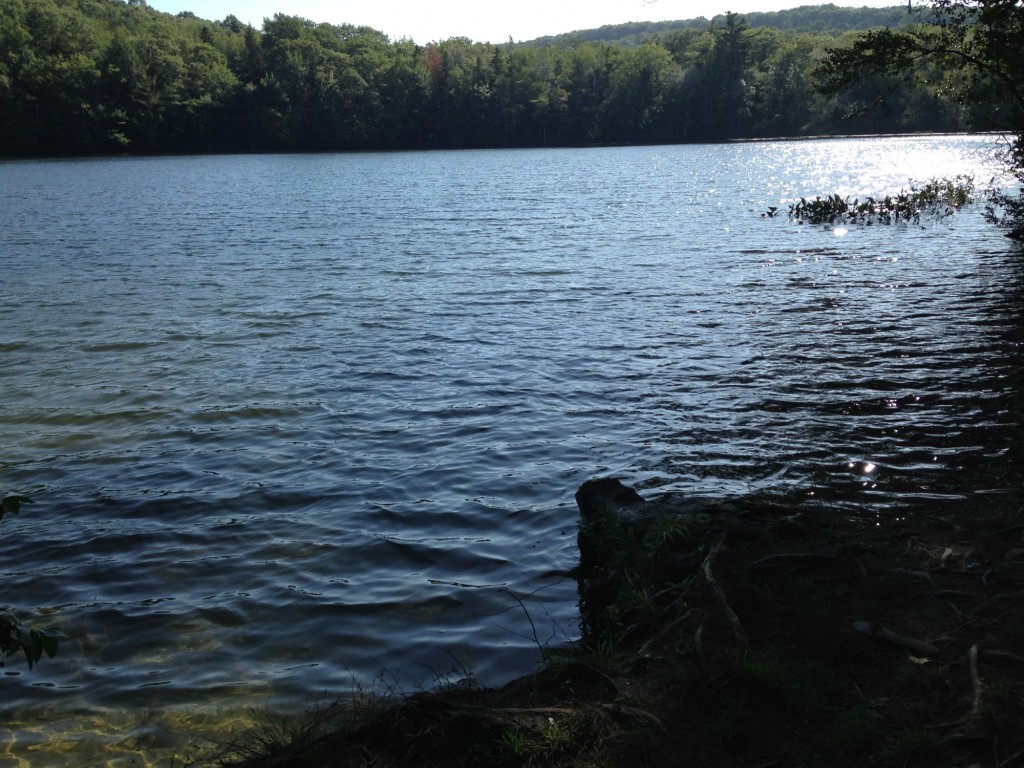 I have no idea how Rocky Pond got its name: there is no rocky shore or rocky beach, and not a lot of rocks in the water, from what I can tell. Maybe it’s just “Rocky Pond” because it’s in Rockport, or West Rockport, to be more exact; although if that’s the case, then nearby Maces Pond (which I wrote about last year) should probably be “Rocky Pond II.”

A small turnoff at the side of Route 17, just South of 90, plays the role of parking lot for visitors of Rocky Pond, and a partial clearing with soft pine needle underground leads to the lake. There is more space to hang out by the water than there is at Maces Pond, so you’re also more likely to find someone other than yourself there. But in my half dozen or so visits this past summer, two families swimming with their kids was the most crowded I ever saw it. Twice there was a young couple just sitting by the lake, and another time a woman was watching her daughter swim. For my own swims, I always had the lake to myself, and it was fabulous. The temperature was just about perfect every time; and the play of light and colors seemed to make this lake even more scenic than Maces Pond. But something about it puts me a little on guard when I go there by myself, maybe because it can feel like an eerie fairy tale setting, with the dark trees and forested beach. In the modern version of this vision, I can see a crime scene unfolding there, straight out of Unsolved Mysteries or a Lifetime movie:  two young girls, let’s say, taking a dip in the pond to cool down during an afternoon bike ride, never to be seen again; only the bikes, hastily thrown against a tree, remain as witnesses.

Well, maybe not that bad. But I do think about someone coming by while I’m swimming, stealing my car keys and leaving me stranded. Maybe I should look into a waterproof key container? As long as I know how not to lose it in the lake…

Imagined crime scenarios aside, Rocky Pond is a beautiful swimming spot. I’d love to swim all across the lake some time (once I have that key container…), but that’s not necessary for a great experience. The water is clean, fresh, and perfect on your skin – and even though the road is close by, it can feel like you’re swimming in your own private lake. One day I wanted to show Siobhan, so we stole away for an hour during housekeeping on a quiet midweek morning in September. Two fishermen had arrived before us, and they weren’t too thrilled about the arrival of two swimmers about to disturb their prey. So they started to talk about snapping turtles – probably thinking we were silly women tourists who would be scared away by any mention of Maine wildlife. (I wonder if they would’ve acted quite the same with a family, lest they be accused of trying to scare kids away from a fun swimming trip). We got the feeling they just wanted to get rid of us, and for that reason alone, we should’ve stayed. But we didn’t exactly feel like undressing and getting in the water in front of them – and then Leah, our head housekeeper, had warned about turtles too (she still likes to do the “scaring people from away” thing with us occasionally). Most of all, even if the chance was small, we didn’t really want to lose our toes. Last thing I needed with my still recovering sprain was another foot problem. So off we drove, down the road to Maces Pond, where we luxuriated in having an even bigger body of water, all to ourselves. 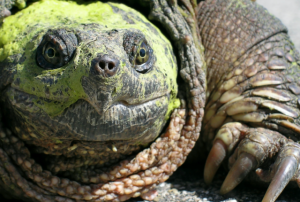 Or so we thought, until we saw a car pulling in by the side of the road. Yup, it was the fisher guys again, probably on a tour of ruining swimming spots for swimmers and trying to make them fishing spots instead. We’d asked them about turtles in Maces Pond, so they must’ve known we would go there. Creepy! Since we obviously had no idea how long they’d stay, my plan was to just get out and ignore them. But I ended up agreeing with Siobhan’s plan: just to stay in the water and make as many splashing noises and movements as possible so they wouldn’t be able to fish. After all, if they could ruin our swimming plan at Rocky Pond, we might as well ruin their fishing plans for Maces Pond.

Well, it worked. One of the guys didn’t seem to be into it; the other was the turtle storyteller. He did cast out his pole, as if in a little phallic power display, just to annoy us for a while or make us feel uncomfortable. But he gave up eventually, having caught nothing, and off they went, probably to the next swimming hole. We drove back later than expected, imagining the story we might have to tell potential early walk-in guests: Ugh, sorry we weren’t here. We had to splash around in a lake to shoo away some fisher men; I’m sure you understand…

Could I ever have imagined such territorial encounters in Maine? On the Jersey Shore, sure, people fight over a few square feet of sand on the beach, or over the position of a yoga mat in the gym – but two men against two women over two otherwise empty lakes in Maine?? That’s pretty absurd.

P.S. I did some snapping turtle research after this encounter, and found that they aren’t out to look for trouble. They only snap when provoked, and usually stay at the bottom of a muddy lake or stream looking for prey. Several people I know grew up swimming in Rocky Pond, among them my physical therapist. He said that there is no danger from turtles unless you try to provoke them. “You gotta be a stupid kid trying to poke them – then you can worry about toe attacks,“ he told me. “Everyone else is safe.”  I made a few more visits to the pond and had a lovely swim each time.  My toes have yet to meet a turtle.

P.P.S. Snapping turtles can get very big though, up to 35 lbs, and they look kind of scary, like a prehistoric reptile. See pics! 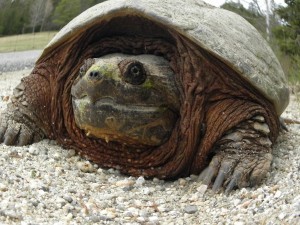 This entry was posted on Sunday, December 27th, 2015 at 9:41 pm and is filed under In and Around Camden, swimming in Maine. You can follow any responses to this entry through the RSS 2.0 feed. Both comments and pings are currently closed.