By Siobhan and Katja

This blog post is dedicated to our friends Bill and MaryAnne, wonderful many-time repeat guests and big TM granola fans.  They will soon be moving into their new Camden home and just recently stayed their last night with us!

The Granola Bowl at Center Stage

Towne Motel granola is our absolute, hands-down, guest-favorite breakfast item.  I know this because:

1. I’m in charge of running breakfast, and the dining parlor gets all quiet and happy on granola days. You know that sound and feeling, when you cook or bake something and it turns out really well, and your guests all go quiet because they’re enjoying it so much?

2.  It’s by far our most-requested recipe, and one I’ve promised several guests to feature in a blog post.

3.  Many guests have said it’s the best granola they’ve ever had.

4.  They ask where they can buy it.  And are amazed that we make our own!

We briefly considered selling gift-sized bags of our granola at the front desk….and then we envisioned the reality: us making batch after batch, the ovens running on hot summer afternoons (even more than they already are), the doorbell and phone ringing all the while.  Like Lucy  and Ethel on the chocolate-factory assembly line.  We abandoned that idea.  TM granola will remain an on-site pleasure.

Katja is the granola chef and I used to worry that the granola was too much work.  But she’s now got it down to a science: 12 minutes to put it together!  It’s true.  If you have all the ingredients and make it a few times, you can start knocking out batches at home.  Everyone will love you.

Recently, Katja got a bit bored with making the same recipe and wanted to try a variation or two.  So we made it into a contest, with ballots.  Our traditional TM granola won by a 2:1 margin.  (Some guests didn’t vote, probably thinking it was strange.  Others really got into the spirit of it and we suspect may have voted more than once.) 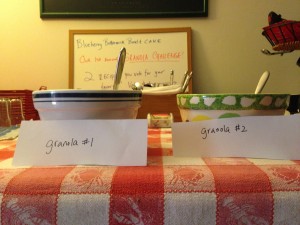 I’m going to hand this off to Katja now so you can get the recipe from her. 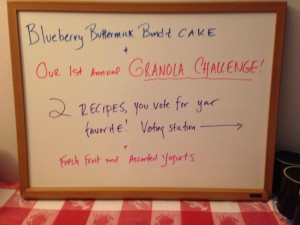 HI! Katja here. I think Siobhan suspects I might not limit myself to the recipe itself, and indeed I won’t. (But don’t worry – I won’t get carried as far away as I usually do in blog posts) Let’s start with some additions and comments on Siobhan’s paragraphs:

– I don’t think the granola is necessarily the most popular of our offerings, but it’s up there, yes – with the advantage that it is liked by many many different people who might otherwise have very different tastes. And whenever it’s offered, most people go for it – because if they have any qualms about indulging in scones or coffee cake at 8 in the morning, they may not think the same guilty thoughts about granola. (Although this granola, like granola in general, isn’t exactly a guilt free treat)

– I can make it in less than 12 minutes! Especially if all the ingredients are where they should be, instead of hiding or lost somewhere else in the kitchen. But I think it’s become less of a science and more of a laissez-faire operation, meaning I’m not quite as picky about the exact measurements anymore.

– I made two other granolas during the last month – the first one a popular internet recipe called “Megan’s granola”, and the other a healthier NYT granola recipe, because it was the day two guests arrived who specifically requested a healthy breakfast. They did not let us in on their definition of “healthy” (protein-rich? Low fat? Vegan? Low calorie? Low sugar?), and they turned out to be pretty low key about it, but I thought it best to be prepared. So, this time I searched for “healthy” and “best healthy” rather than just “best” granola recipes, with oat bran and/or wheat germ, neither of which is part of our Towne Motel granola. 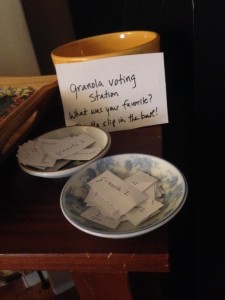 Interestingly, the healthy one I think was a lot better than the other one, but neither of them came close to Towne Motel granola in popularity. And on top of that, they were more complicated to make. Which means it’s time to come clean about our source, lest we be accused of plagiarizing: it’s a Food Network recipe created by Alton Brown. (super easy to Google)

And now, finally – The Recipe!! Here it is, complete with annotations and adaptations:

1 cup cashews, in pieces or halfs and pieces (even roasted and salted cashews work great)

optional (not part of the original recipe): a few shakes of cinnamon

Mix all these in a large bowl. In a measuring jar, mix

– optional (not part of the original recipe): 1-2 tsp vanilla

Pour over and mix into dry ingredients, making sure everything is coated equally. Spread onto two baking sheets (no need to use parchment paper or cooking spray, though it’s probably fine if you do), and bake in a pre-heated 250 degree oven for about an hour and 15 minutes, stirring at least twice during the baking time. Pour/ladle/push/scrape  into a large bowl and add about a cup of craisins or raisins or a mix of both. Have a taste while it’s still warm! That way you know what to look forward to for breakfast the next morning.

What makes this recipe so easy and convenient?

– For one, the wet ingredients don’t have to be cooked or heated, like in other recipes. Just mix well, then mix with dry ingredients.

– It’s easy to remember the ingredients and even the amounts if you just make a bit of an effort. That way, you don’t have to keep looking for and at the recipe, which is what always slows me down while baking. This recipe is fast because I’ve known it by heart for more than a year. All the grains and nuts are 1 cup each, with coconut the only exception. Both sweeteners, maple syrup and brown sugar, are 1/4 cup plus 2 tablespoons – easy to remember, after a while anyway.

– Since the prescribed oven temperature is low, the baking time is somewhat flexible, depending on how crunchy you want your granola (and depending on how often you’ll remember to check your oven). One time I dozed off for a nap and woke with a start – “The granola!!”- clearly expecting I’d have to make another batch that night. But no, there it was, just fine, if perhaps a bit crunchier and clumpier, but by no means burned. And no one complained the next morning.

– You can add or substitute a whole bunch of things and still have it taste distinctively like Towne Motel granola. We’ve added some pumpkin or sunflower seeds, used dry apricots or pineapple in addition to raisins, made a lower calorie /lower fat version for our health-conscious head housekeeper, added extra toasted coconut one time because I thought I’d forgotten the coconut, which I hadn’t – and it was all still very good.

– It keeps well, too, in a storage or freezer bag. You’ll notice the difference between freshly baked and one week old, but the one week old is still excellent. Even the two week old is good! I haven’t tried to freeze it yet, or substituted other nuts (I’d never leave out the cashews! And definitely not the coconut) – nor have I added chocolate chips or other more decadent ingredients. Maybe one day when we have a lot of kids, we could make half the bowl with some additional M&Ms, and see how that goes.

So, the bottom line: TM granola is easy, easy going, flexible, versatile, reliable, low maintenance (just like our favorite guests – :)) – and popular. If it were a presidential candidate, it would be a bit like people used to say about Walter Cronkite or Oprah for president: almost everyone can vote for it. It’s not a controversial menu item, this granola. Although I have to admit that didn’t stop us from having a debate about it once – later remembered as the quiche versus granola debate. But that would be the stuff for another blog post, if we ever feel like revisiting it – maybe on a long snowy winter night. 🙂

This entry was posted on Monday, August 3rd, 2015 at 6:52 am and is filed under Favorite Breakfast Recipes, Food. You can follow any responses to this entry through the RSS 2.0 feed. Both comments and pings are currently closed.