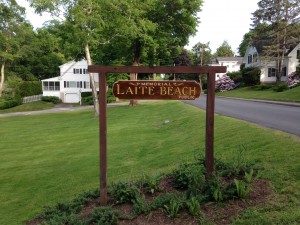 We had started falling in love with Laite Memorial Beach just weeks before we moved here – when we came to Camden to get a few days of training from the previous TM owners, Rick and Jane. During an afternoon break one day, we went for a walk up Bay View Street and discovered that we’d have a beach in walking distance of our inn and home! A very scenic beach, too, where we could watch the schooners sail in and out of the harbor and look up to the top of Mt. Battie, plus have a picnic on the grass or the pebble and sand beach – and, of course, where we could swim! We weren’t complete strangers to the cold Penobscot Bay waters even during the height of summer; we’d swum a few times (including once in October!) at the beach at the High Tide Inn (and have the pictures to prove it). So we knew Laite Beach would be just as cold, but, we thought, on a hot day it would be refreshing, and even on a not so hot day, it would always feel good to at least wade in the water, watch the ducks, and luxuriate in the amazingly fresh colors of the blue bay, white boats, and green hills beyond. 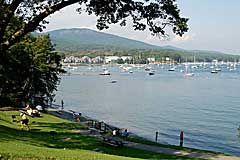 Less than a month later, the first few days of our new innkeeping life had passed, and the weather was a nice Indian summer 65-70 degrees. We were still in the process of figuring out a lot of things about our daily schedules (like – can one of us ever leave for an hour??), and I hadn’t been taking enough care of my outdoor and swimming needs. Well, that day – I think it was the day after Rick and Jane left, leaving us to our still rather ignorant devices –  I realized I really just had to go swimming. Maybe the timing was metaphorical (Rick and Jane had thrown us in deep water and there was no choice but to swim), or maybe I was just desperate and knew it might be my last chance for the season. Either way, there was no way I would NOT swim that day. We had Aini help us with early check-ins and phone calls that day, so around mid day, I packed my bag and walked over to the beach. Almost no one else was there – it was a week day in October, after all – and certainly no one was crazy enough to be in the water.  Except me – but compared to the crazed first week we’d just had, this didn’t feel crazy at all.

No crazier, really, than swimming here feels in July. The best water temps are probably in August or early September, when the bay has had a few months to try to warm up. (“Try” = it never quite succeeds). But if you try to swim about once a week, you notice how hard the bay keeps trying to get warm. Once both you and the water have tried hard enough, you can get about a 10 minute swim together. And when the sun helps out, the cold river currents marbling through that bay (yup, even colder than the regular 60 degrees) won’t be such a shock – you might even call them refreshing.(I’d recommend a hot humid day in August, perhaps after a run, to get that feeling). 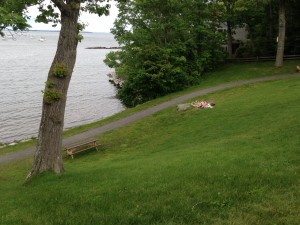 It may be tempting to try Laite Beach in June. It looks much like a beach in more summery climates then – with people playing, tanning, looking for rocks, and having a picnic. But you’ll probably wonder why they don’t seem to spend much time in the water: do Mainers not swim much, perhaps, living in such a wintery state? Do they not know how to swim? Or does the water harbor dangerous creatures which only the locals know about? Well, you will probably get your answer by actually going for a swim. 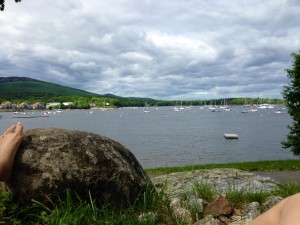 Like I did towards the end of June, on a beautiful warm afternoon. I packed a big bag of beach stuff, including a change of bathing suits, spread out a brightly colored beach towel on a sunny patch of sand, and settled down. I didn’t even last long – the sun, prior swim deprivation, and almost-heat ( I have yet to see anything resembling real heat in Maine) sent me off into the water, eager for refreshment.

Instant refreshment indeed. Let me rephrase that: COLD is the better word for it. So cold, indeed, that my feet ended up having a strange new experience – they remained numb and tingly, just off somehow (as if drunk or on drugs) for hours afterwards. For the details of this story, read my next post, “Swimming in Maine – better bring your Wigwams!” Suffice it to say that wool socks had to be summoned to get my feet back to normal that day.

We did have quite a few nice swims and peaceful Happy Hours at Laite beach in July and August. And we weren’t the only ones in the water, nor the only adults. We tend to swim out a bit farther than others, close to the boats, and one night we had a talk with regular guests of ours who are building a house close to the water. When we mentioned our beach visit that afternoon, they said, “oh, we were wondering who these crazy swimmers were, out by the boats!” From then on, we waved at the house whenever we swam by. 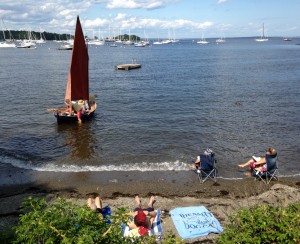 We recommend the beach to whomever among our guests seem serious about ocean water swimming. I remember one family who went several times, and they all swam. We know because they had the constantly wet hair and beach towels over our balcony to prove it. (Towne Motel doesn’t usually have that beach hotel look). We recommended lakes for leisurely warm water swimming, but they stuck to Laite Beach, which I bet they now remember as their favorite place in Camden. They were from Denmark.

Other than for Danes (and maybe Great Danes?), Laite Beach is great for anyone not looking for a place to swim for exercise, unless they’re seals or extreme wet suit swimmers. But hey, now the news is that climate change is making the coastal Maine waters too warm for cod to stay, and maybe, eventually, even for lobster. Does that mean that some day people will come to Maine primarily for beach and swim vacations?? If so – and if we’re still alive and with it by then, we’ll look back longingly to the days when the water was pristine and clear and amazingly blue – so what if it was too cold to swim. When it comes to reasons not to swim, too cold is still better than too crowded– especially if the cold comes with lobster, and the warmer temps without. We can’t have a Maine without lobster!

This entry was posted on Monday, February 2nd, 2015 at 5:18 am and is filed under swimming in Maine. You can follow any responses to this entry through the RSS 2.0 feed. Both comments and pings are currently closed.